Get fresh music recommendations delivered to your inbox every Friday.
We've updated our Terms of Use. You can review the changes here.

Music of Benares in Brighton

by Music of Benares 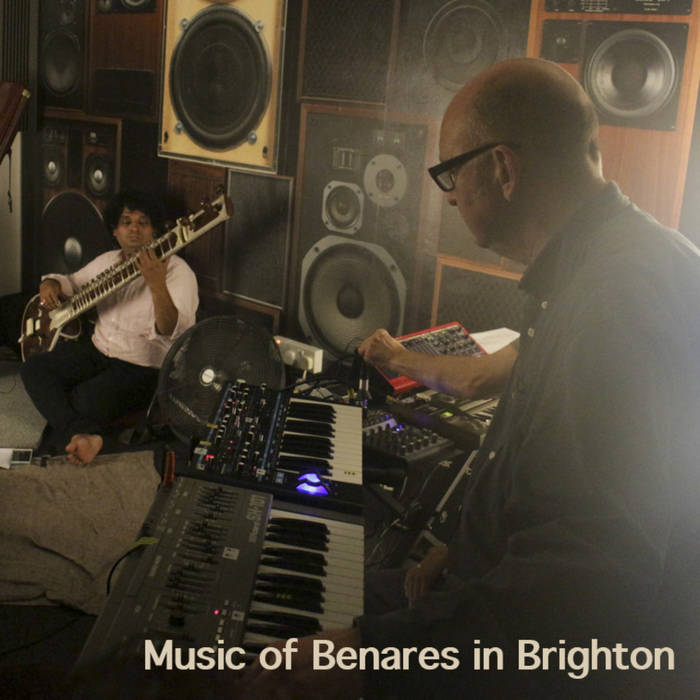 "It is not supposed to be a classical recording like those of the great sitar players Pt Ravi Shankar, Pt Nikhil Bannerjee, Ustad Vilayat Khan, Ustad Shahid Parvez, Ustad Abdul Halim Jaffer Khan or indeed Pt Shivnath Mishra or his son Deobrat Mishra. Wonderful CDs of such music are easy to find. It is not a classic recording of another instrument such the sarod or bansuri or a khayal or drupad singer. We wanted to avoid the paths trodden with fusions of Indian Classical Music by pioneers such as any of the above, or Anoushka Shankar, Ustad Zakir Hussain, Roopa Panesar, Niladri Kumar, VM Bhatt, Colin Walcott, Tabla Beat Science, Shri, Talvin Singh, Nitin Sawhney, John Mayer.... It's a wildly varied and endless list already. All these people are all fantastic and inspirational. The challenge was to do something beautiful and something original. In fact the players assembled here were strong enough individuals to actually make this a very unique collaboration.

"For me this project was special because it brought two worlds together. My own sitar electronica modus operandi had developed whilst I enjoyed promoting, DJing and collaborating with the Spirit Of Gravity music collective in the early noughties in Brighton, embracing electronica, musical experiments and just about any genre as long as it was done with conviction. I wouldn't be doing what I did, with my sitar and beats and Max patches without Spirit of Gravity.

"After years of subsequent sitar study in London I went to Benares to study some more with Pt Shivnath Mishra and his son Deobrat. I got to know them as Guruji and Debu. I knew they were great musicians and teachers of the 'Benares singing style' of sitar playing.

"We spent a lot of time planning the workshops, collaborations and concerts, for MoB to meet SoG. We thought long and hard how to make the most of this opportunity. Andrew and I sent audio to and fro, sketching out ways that synths could work with Hindustani music, trying to keep it fresh.

"After a last minute battle to obtain visas (with an all important plea to the Home Office from Green MP Caroline Lucas to let the musicians into the country) it was a great experience to finally welcome the Musicians of Benares to the UK, for the first time. I couldn't quite believe it was happening when I greeted the gentlemen from their Eurostar at St Pancras and I immersed myself in being their tour manager for a week. We quickly got involved with music sessions in the community, getting people to play ragas and talas with us. To sit them down in a Brighton rehearsal studio and on a concert stage with my friends from the Spirit of Gravity collective, still going stronger than ever, was the culmination of things. The unfolding music is finally presented here.

"On Sunday 8th November 2015, the audience at the sold out Brighton Dome Theatre consisted of many who had played music earlier in the week in Music of Benares workshops, witnessed the second ever Music of Benares performance in the UK. (The first was days earlier in a tiny packed venue in Birmingham). Guruji, Debu and Prashant performed a complete 60 minute Raag Jog before more brief extrapolations of Raag Piloo and Raag Bhairavi.

"After that their captivating traditional performance they took the very rare step of allowing us UK musicians on stage with them for the fusion pieces practiced the previous day at Bird Studios. Usually fusion pieces are not performed on the same night as their classical ragas. It was an unusual coda to the evening, but judge yourself, I was very happy. Howard Spencer and I played a 'lehara' style synth and sitar riff for Prashant to launch spontaneous tabla fireworks with his tablas. Geoff Reader and Andrew Greaves and provided an exquisite backdrop for Debu's rendering of a 'Poorvi' (beatless) alaap on sitar.

"My thanks to all the musicians, the people who helped with all the workshops, the Arts Council and Caroline Lucas for making happen this beautiful and unique instance of Indian Classical electronic fusion.”

“It was great opportunity to perform first time in UK in 2015, we had some great memories while performing in UK with some local musicians and having great cultural exchange with the music. I would like to thank our student Chris Cook and his friends who made our trip possible to UK.
It was also nice to perform in Brighton Dome where all audience were happy to have us in UK.
We had some great workshop in some important universities, so I'm hoping we will be returning soon to UK and bring our music which is for peace in the world.
Thank you.”

Frayle's Gwyn Strang and Sean Bilovecky join the show to talk about their cathartic new album.